Mr. Tropical and I could not agree on tile grout color.

We decided to ask you, my readers, to vote on which tile grout color you like!

Our second bathroom bathtub needs to be replaced. We have been putting it off until recently. Coral hates to take showers in our master bathroom. The plumber said that he would also remove like 4 rows of wall tiles. So, we decided to just remove the entire walls of tiles to have it all match. THEN, we decided to replace the window, too.

Mr. Tropical removed the tiles and drywall on all three sides. I told Mr. Tropical to expect bad news when he removes the drywall because it was always like that on TV. To our surprise, it was all perfect.

So, which tile grout colors we could not agree on?

Mr. Tropical wants white grout to match the white subway tiles. I want grey grout to make a statement in the bathroom.

The Before picture, yuck!

The black frosted window makes the bathroom all dark and dingy. When we bought this house, everything in this bathroom was beige.

You can see that Coral is excited about the new bathroom!

Before we start putting the walls back up and install the tiles, we will build two niches on that bathtub wall right next to the toilet. The top niche will be for guests and the potted plant will be moved over there. The bottom niche will be for Coral’s stuff and a soap bar. I am thinking about adding a frosted vinyl to the bottom half of the window for some privacy.

Eventually, we will change the sink vanity, the lighting and the flooring.

I agree that white grout looks clean and fresh, but the bathroom is already white all over. The walls, ceiling, beadboard, window and subway tiles are already white. I thought grey grout would make a cool statement and adds character to the bathroom. Also, we have a messy toddler so grey grout will hide the dirt!

I will show you some examples of both white and grey grouts. Then, please do me a favor and vote! 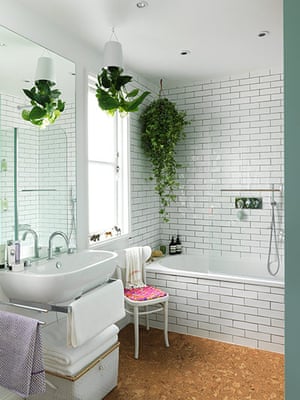 Maybe we will compromise and meet halfway at light grey instead of white or dark grey. What do you guys think?!

How To Make A Multicolored Wood Accent Wall

How To Make A Multicolored Wood Accent Wall

6 Reasons Why You Need A Fresh Club Botanic Wreath Delivered

Elizabeth Edgar is a Deaf mom blogger based in Sarasota, FL with her kids.
She writes about her journey exploring life visually. She wishes to educate her readers about deafness and sign language. While doing so, she also share DIY tutorials, recipes, kid activities, motherhood stories, ASL guides, etc.

More about me here...

Time To Break The Taboo About Pregnancy And Infant Losses